For billions of years, Earth's oceans have maintained a acidity level. However the recent drop in surface pH has disrupt the balance of carbon dioxide concentrations in the ocean. Before the Industrial Revolution in the 1800's, our historical ocean pH was a slightly basic 8.16. Since then, fossil fuel-powered machines have advanced humans. However, the consequences were CO2 emissions and other greenhouse gases releasing into Earth's atmosphere, and too much of it is bad because it contributes to global warming.
Overtime, massive amounts of CO2 have altered the seawater chemistry and thus affecting the life cycles of many sea animals.

Today, the ocean pH is around 8.1. By 2100, the pH level will fall to approximately 7.87, which is practically five times the amount of acidification that has already occurred.The seawater pH baseline is continuing to rapidly shift and animals living in the ocean will not have enough time to adapt.

What will happen in the future?

Scientists have predicted that seawater pH will drop to 7.7 from a normal 8.1. This means that the acidity will triple.

Studies have shown that the increased acidity dramatically lowered the urchins' ability to reproduce - up to 25 percent - by inhibiting the movement of their sperm. Only 75 percent of the resultant eggs developed into larvae. A 25 percent drop in fertility would equal to a 25 percent drop in the reproductive population. Organisms whose shells or skeletons are made up of calcium carbonate will suffer because of ocean acidification.

At this rate of ocean acidification, the sea creatures may eventually diminish. We must somehow reduce it's rapid rate so it's detrimental effects will not wipe out these organisms. 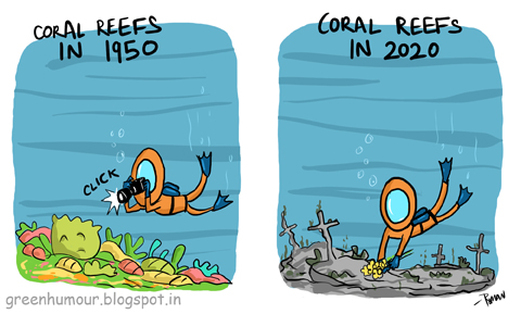 "In areas of the world's oceans where it is hardest for marine creatures to make their limestone shell or skeleton, shellfish and other animals have adapted to natural environments where seawater chemistry makes shell-building materials difficult to obtain. Evolution has allowed shellfish to exist in these areas and, given enough time and a slow enough rate of change, evolution may again help these animals survive in our acidifying oceans", said Dr Sue-Ann Watson from James Cook University